1. It first appeared in the only city in China with a BSL-4 laboratory capable of creating biological weapons – Wuhan
2. The first doctors to report its appearance among the public were arrested and silenced
3. The Chinese government originally tried to cover up the existence of the disease
4. It has genetic fingerprints that do not normally occur in nature
5. The Chinese are attempting to take extreme steps to control it, steps so extreme they have never been taken in human history

There’s more to the story.

BSL-4 labs like these – in the US, Russia, China and Israel – exist for one reason only: to weaponize diseases. They have no other legitimate purpose.

The World Health Organization (WHO) signs off on the creation and operation of most of these labs.

Big Pharma provides the WHO with 50% of its funding.

The sponsor of these labs in the US is the Pentagon and they’re assisted in their work by the CDC.

Dr. Francis Boyle is an international law professor at the University of Illinois and author, among others, of Biowarfare and Terrorism. He’s the man who drafted the U.S. Biological Weapons Anti-Terrorism Act of 1989 signed into law by George H. W. Bush.

He says the coronavirus has all the appears appearances of an offensive biological weapon that escaped from the Wuhan BSL-4 laboratory.

Is it coming to the US? – Probably

How the virus kills 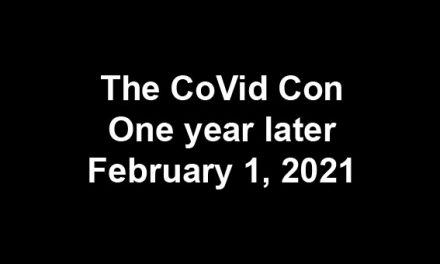 The Big Con, one year later

The corruption of medicine described

The government war against families