If animal food is bad for you, why do some people “need” it?

The answer you won’t hear anywhere else

Thank you so much for sharing your experience with me.

I feel honored that you could be such an honest observer and reporter of your food journey and that you feel comfortable communicating your insights with me so clearly.

Yours is not the first such experience I have heard about and I would like to share some insights with you about what I think might be the root of your unsuccessful encounter with vegan nutrition.

Like so many of our ongoing health issues, this has its roots in childhood.

In modern America, at age 6 months or so in the infant’s life, a jar of Gerber Baby Lamb, or Chicken, or Turkey is opened and fed to the child.

From that point on, every 5 hours, animal flesh is being slathered on the child’s intestinal membranes and flow through the child’s blood stream. Every meal is centered around a piece of an animal: bacon and eggs for breakfast, cheeseburgers for lunch, chicken for dinner, etc.

This continues throughout infancy, childhood, adolescence and teen years, and for decades after that.

As a result of this animal-based diet, a person’s metabolism experiences an almost continuous flood of animal muscle-derived nutrients – carnitine, creatine, and hundreds of other flesh-based nutrients – flowing through all cells on a daily basis, and playing the person’s DNA like a piano – turning on certain genes and turning off others.

It may well be that the genes responsible for synthesizing these muscle-based nutrients – carnitine, creatine, myoglobin, etc. – seeing that these pre-formed animal substances are coming into the body every few hours in the food stream, begin to down-regulate their own production of these components. After decades of the animal-based food stream, these down-regulations can become semi-permanent and is known as “gene silencing.”

As a result, the person becomes chemically dependent upon these preformed, animal-derived substances.

If, as an adult, the person suddenly changes to a vegan diet, these pre-formed nutrients disappear from the bloodstream and the person’s cells are suddenly required to synthesize these nutrients on their own. Most people are able to do this but some people – and it is likely you are among them – may be unable to gear up their “metabolic machinery” sufficiently to produce adequate amounts of these essential nutrients required for energy metabolism and other active functions in the body.

As a result, as the years go by – six in your case – the body draws down on its nutrient stores and deficiencies – and resulting decreased function – become manifest.

When the person once again inserts flesh into their diet, and, once again, these pre-formed, muscle-derived nutrients flood through the tissues, the person feels restored, as in your case.

The conclusion that people may reach is that they are an obligate carnivore and that the vegan diet is inherently inadequate.

I submit that this is not a natural state of human metabolism. What has been observed is an acquired dependency upon flesh foods as a result of an animal-based diet fed since infancy.

This is not normal human physiology, but an artifact of a flesh-based diet made possible only through the unprecedented affluence of Western societies.

Again, this is an acquired dependency, not normal human physiology.

The people who do not experience functional deficits and meat cravings are people who have been raised as a vegans since birth. They grow to full-size and functionality without ever craving or eating meat.

I suspect that your dependency upon animal flesh has been “hardwired” into your metabolism since your earliest days and now is manifesting. (Your mother didn’t know this – neither did mine.)

A couple of comments might be helpful at this time:

At this time, I can understand why you are eating flesh on a daily basis and are experiencing a benefit to your body. You, no doubt, have accrued significant nutritional deficits which the flesh-based foods are now repairing.

If your experience parallels others who have found themselves in similar situations, the nutritional deficits will be repaired over the next several months.

Once that saturation point is reached, the need for flesh on a daily basis will begin to diminish.

Remember that I wrote that the “gene silencing” is semi-permanent. That is, that the genes can eventually “wake up” and begin to resume their normal function.

Consequently, you will likely find that, once the nutrient repletion has taken place, the nutrients in the animal muscle that enter your tissues will give you a metabolic charge that will last for several days – or longer.

That is, you will find that you feel just as good when you consume animal flesh every other day as opposed to daily. You will find you can eat a piece of meat and coast on it for a day or two – or more- before you feel the need for more.

There are advantages to this, since consuming animal muscle on a daily basis summons up a population of bacteria in your gut that eats carnitine, a major constituent of animal muscle. The waste product of their carnitine metabolism, trimethyl amine, is oxidized in the liver to trimethylamine oxide. This is a “molecule from hell” that drives cholesterol into the artery walls and promotes atherosclerosis and other vascular diseases.

Packing the colon full of meat daily is also a good way to promote cancer of the colon, as many meat eaters have sadly discovered.

What I am suggesting by this is that you might want to allow for the fact that your need for animal flesh may well decrease as time goes by and to allow this to happen.

My guidance to you would be to seek to find the smallest amount of animal flesh your body requires to function optimally ( this is usually about a 3-ounce piece of flesh – about the size of a deck of playing cards – and to view it is a potent “multivitamin” that is toxic in large amounts, and thus to eat it is seldom as possible.

As a result, as the months go by, you may well find you only need to eat it once or twice per week – and this would be of benefit to your overall health and your disease risk.

I hope the above is clear to you and that you do not become one of these anti–vegan writers who pours “the vegan diet is inadequate and harmful” screeds all over the Internet.

Your case is not unique to you – many others have experienced the same thing – but again, as I implied, is probably an acquired artifact of metabolism, rather than being a commentary on an apparent universal inadequacy of plant-based diets.

I appreciate your clear, honest communication about this and would look forward to staying in touch with you and participating in a constructive dialogue between us.

Let me know if you have any questions or comments about any or all of the above. 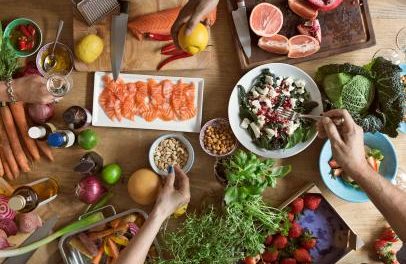 The effect of animal fats

How to read food labels